Baron Ironblood, Charlie’s Angels, Speeder Bike pilots, Transforming robots and multiple comic heroes trying to read over Superman’s shoulders… just some of the characters featured in the latest ads to line up inside TVTA’s scanner. This week’s selection comes from UK publications Eagle, Eagle and Tiger, and Star Wars Weekly.

First up, spot the famous comic heroes trying to take a peek over Superman’s shoulders to snatch a look at the latest comic available from the Forbidden Planet Store. 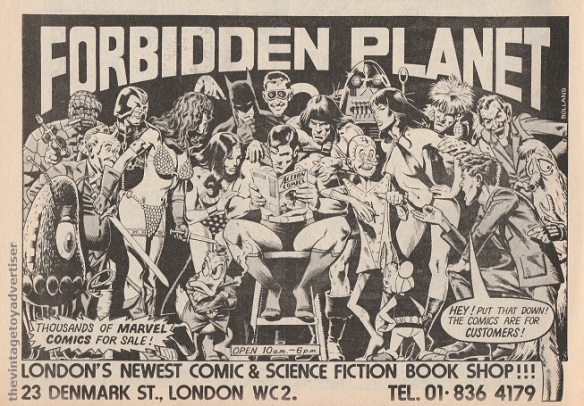 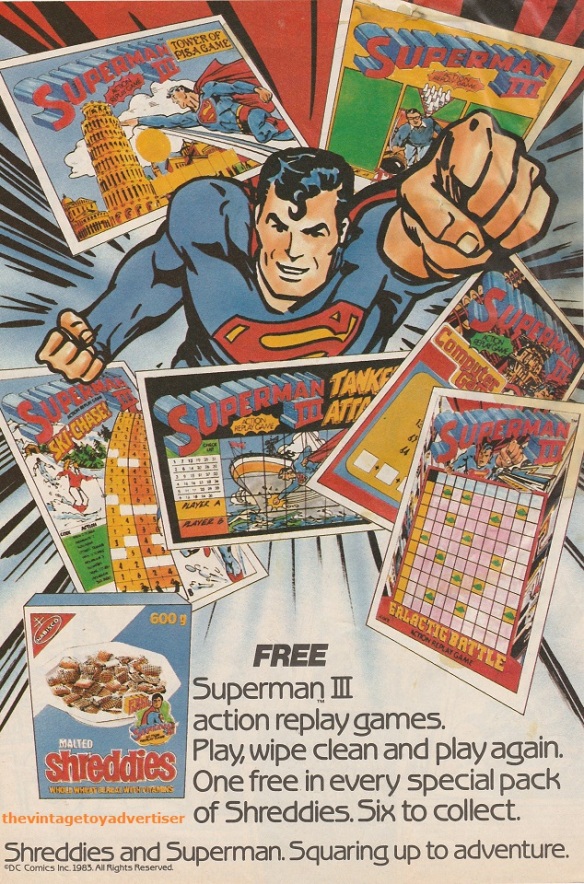 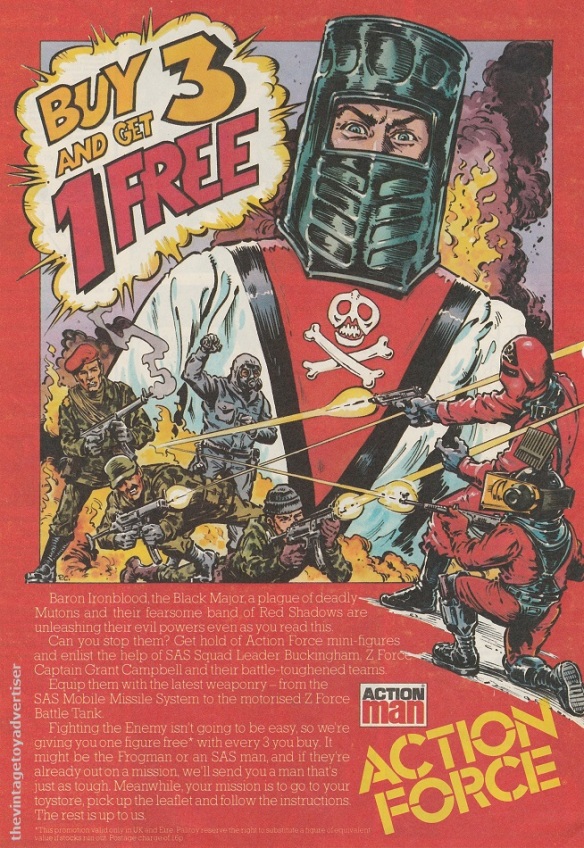 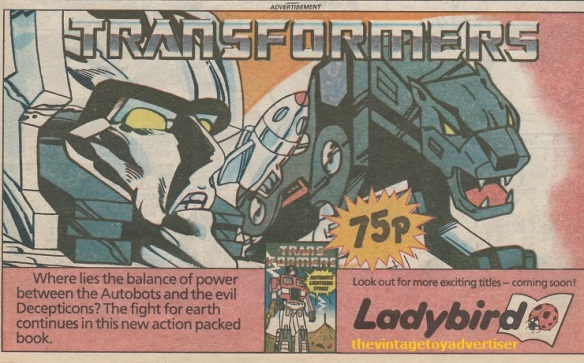 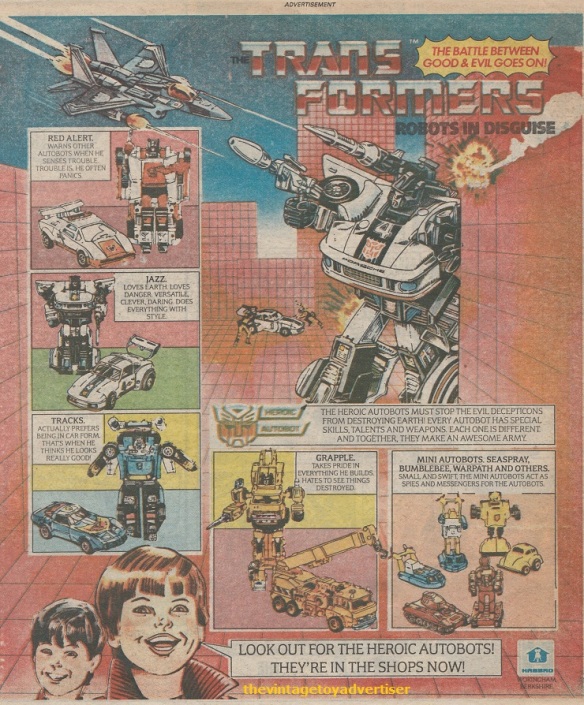 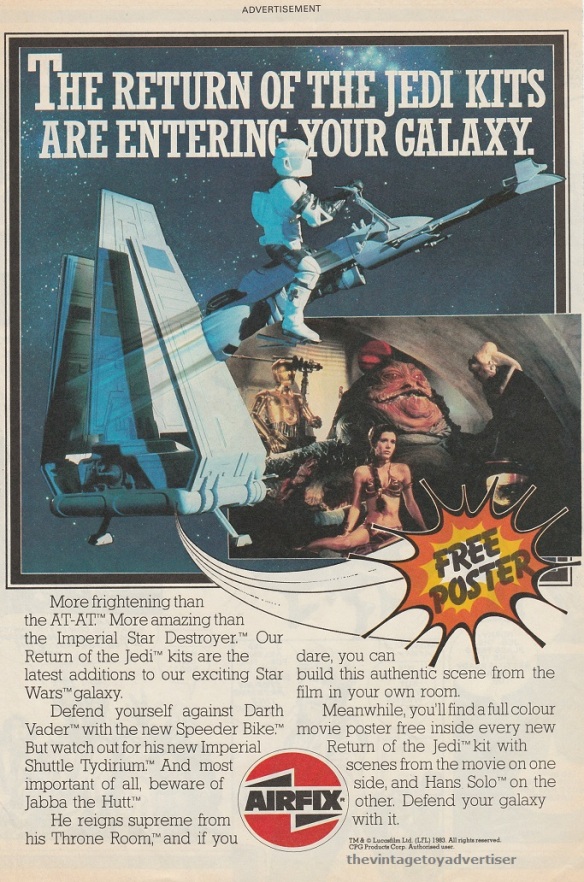 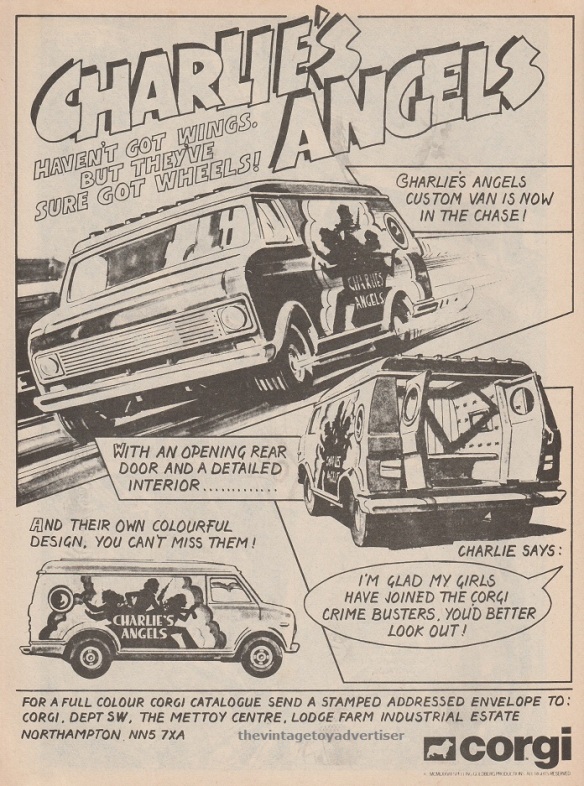 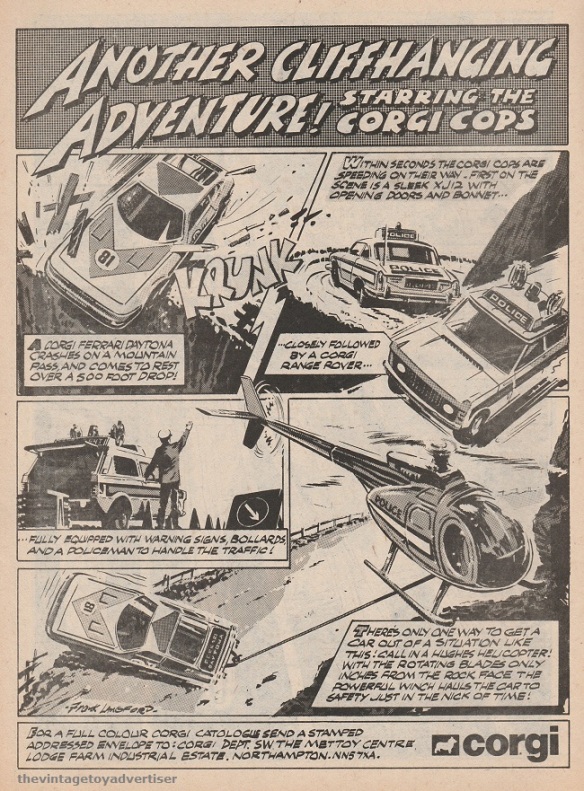 I’m pleased to add this 1980 advert to my collection. It’s a Forbidden Planet promotion inviting fans along to their original and first London store to welcome visits by Dave Prowse (Darth Vader) and Anthony Daniels (C-3PO). 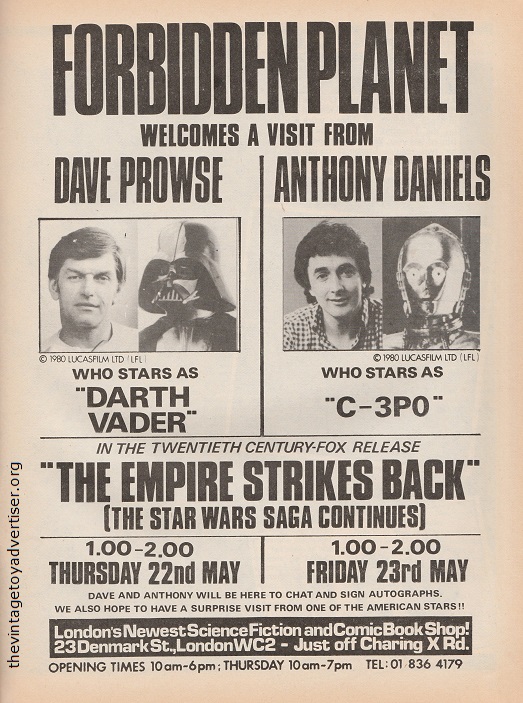 The ad style reminds me of an old-school boxing poster or a concert venue ad. It has a certain ‘seasoned’ quality to it – and not just because of the foxing of the paper: the store premises, located in London – number 23 Denmark Street – was Forbidden Planet’s first High Street store, opening in 1978.

This 1978 ad below is probably one of the first adverts for the Denmark Street store. The artwork is by Brian Bolland. Beneath an impressive line up of famous comic stars all trying to snatch a peek over Superman’s shoulders at what the Man of Steel is reading, the advert proudly proclaims: “Londons Newest Comic & Science Fiction Book Shop!!!” 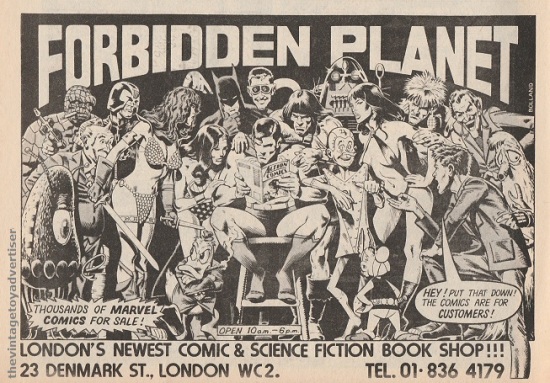 Due to its success and the demise of some of London’s older comic book outlets, Forbidden Planet grew up quickly and offered a broad product base, attracting fans of not just comics but also TV and film. A second store purchase (nearby in St. Giles High Street) was required to cope with its popularity. Later, further location moves were necessary and the Denmark Street and St. Giles High Street stores eventually combined and moved to new premises.

The following two adverts, with artwork by Brian Bolland, are both 1980 Denmark Street survivors. This first invites readers to send off for a catalogue of their choice from three categories: film & TV; science fiction & horror; and comics. 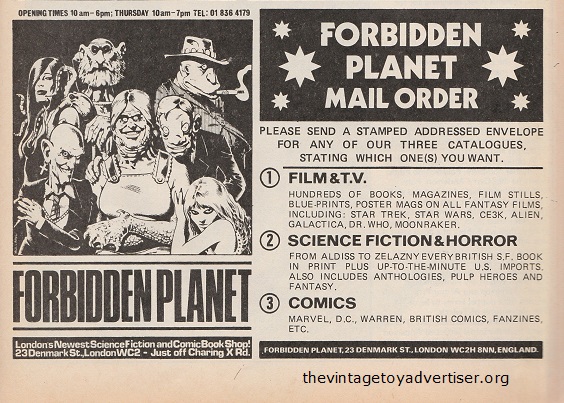 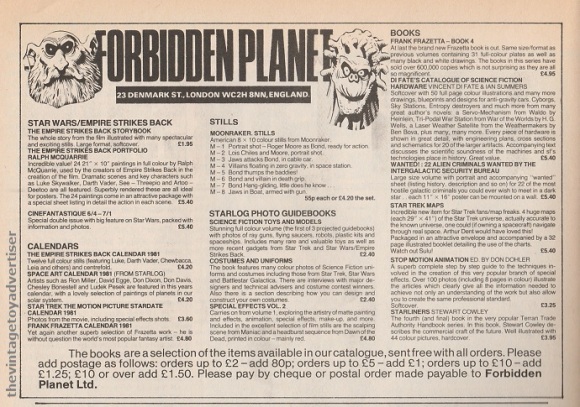 This 1983 ad features a range of Return of the Jedi merchandise and a Star Trek 1984 calendar available for order by sending a cheque or postal order to the Denmark Street address. 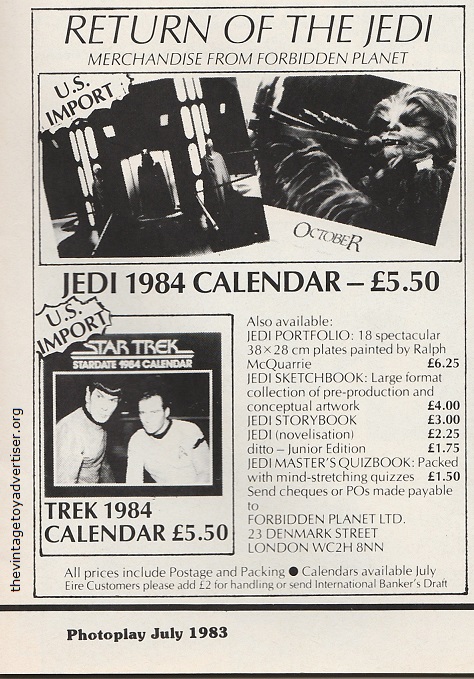 The quarter-page adverts below all feature titles from 2000 AD. 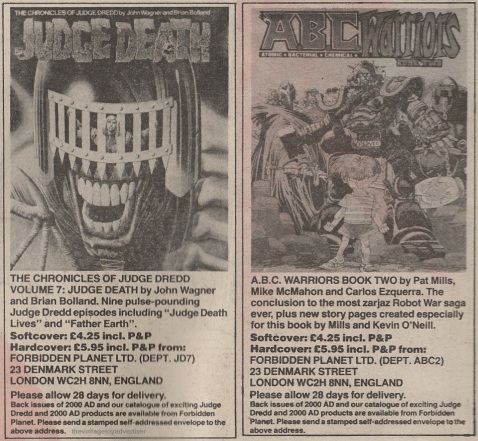 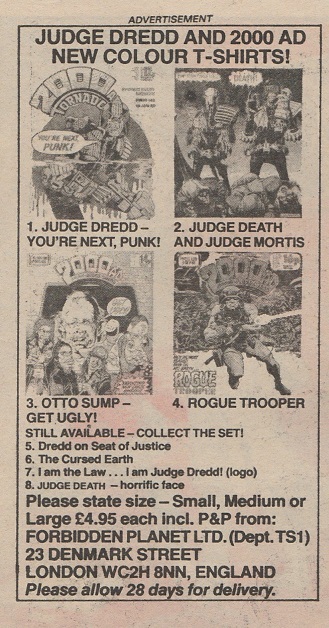 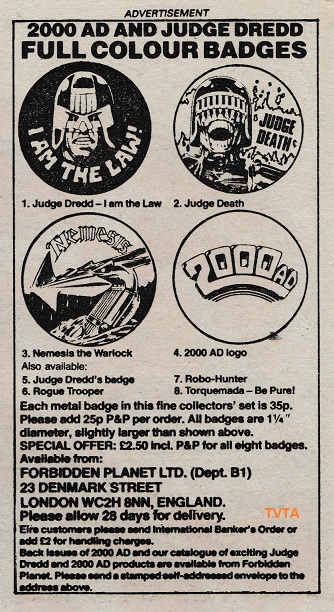 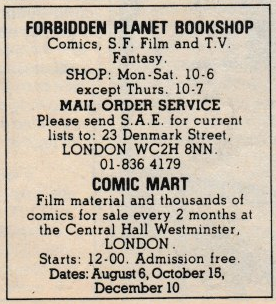 This superb colour ad (recognise Bolland’s work again?) mentions both the Denmark Street and St. Giles Street shops. The former is credited as ‘The science fiction and comic book shop’ while the latter is credited as ‘The cinema and television shop’. The advert also appears as a variation in 1984 showing alternative merchandise pictures to the later version below. 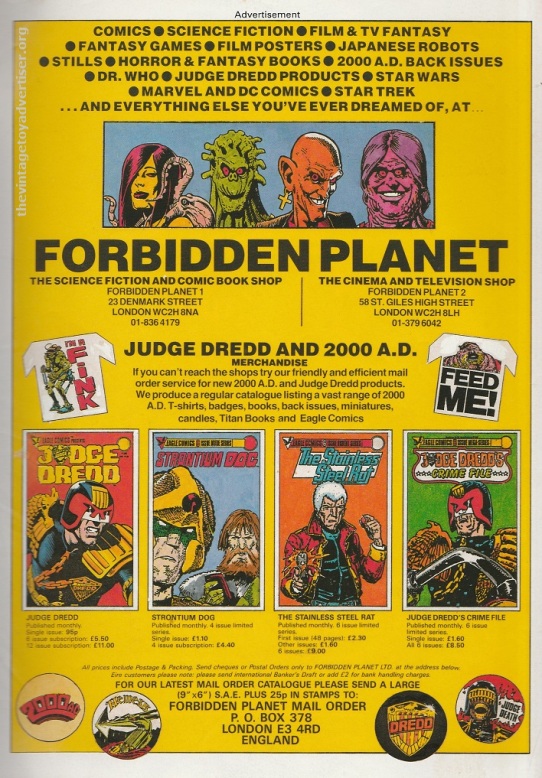 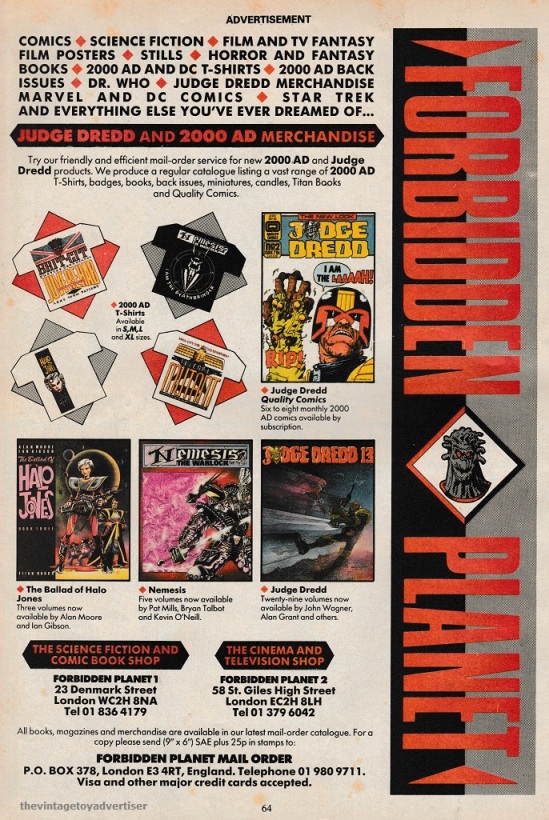 Denmark Street in a comic strip! 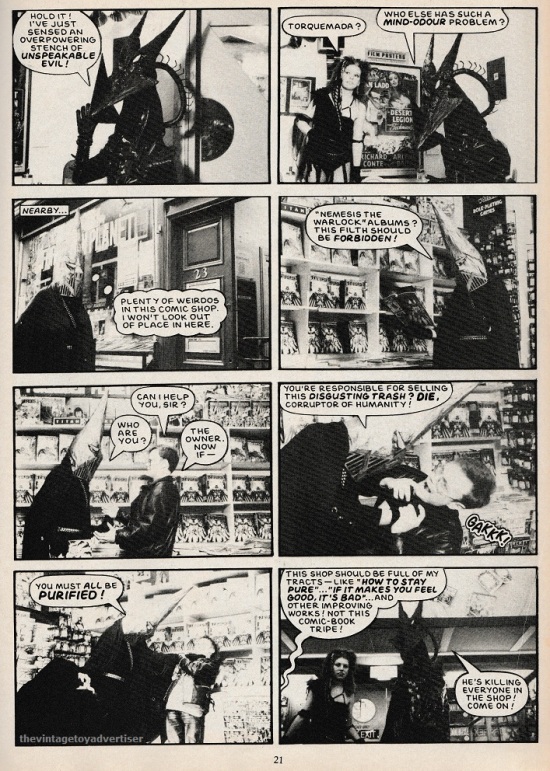 I mean, it’s got to be it, hasn’t it? Forbidden Planet logo on the window, 23 on the door… 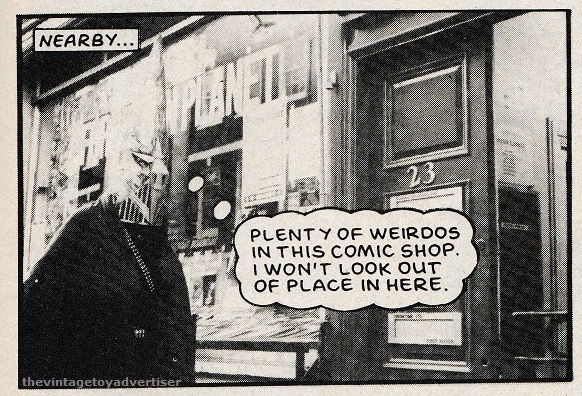 Here we can see the appearance of other branches outside of London: Milton Keynes, Brighton and Newcastle-Upon-Tyne. 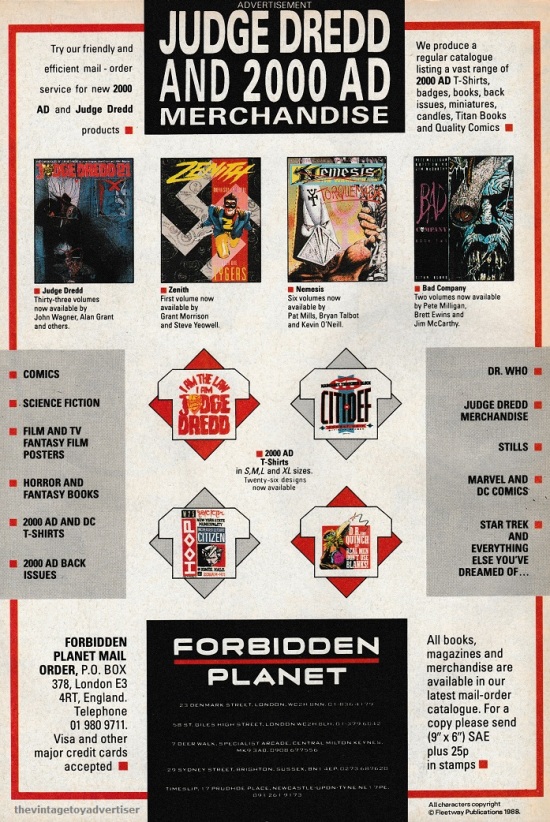 The company eventually split into two entities: Forbidden Planet and Forbidden Planet Scotland (later renamed Forbidden Planet International). To date they have some thirty stores between them situated all across the UK including well-known associate stores such as Nostalgia and Comics in Birmingham and Liverpool’s Worlds Apart, along with a US store in Manhattan, New York. Forbidden Planet also offers an established webstore and online presence. Not bad for its humble beginnings as a small high street comic store on Denmark Street, WC2.

I picked up this rather cool souvenir magazine at the FP store in Birmingham, England on a recent visit. So pleasing to see the Brian Bolland original artwork used to commemorate their big 40. Congrats FP, and here’s to another 40! 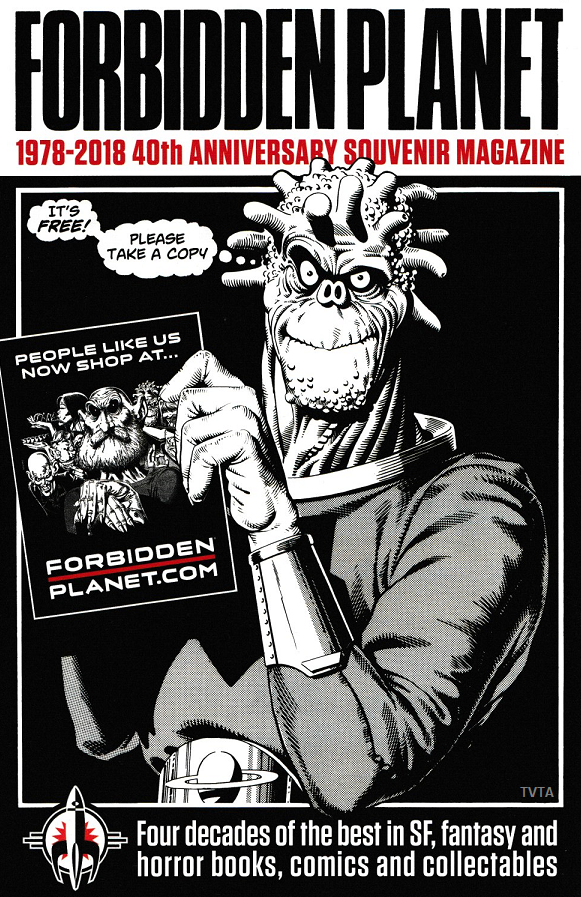 Article and photos on Forbidden Planet stores by Darkest London