Press Gang for a Bull. Drawing by Ford Waight. February 2021.

I’m linking up with Denise at Girlie On The Edge Blog, where she hosts Six Sentence Stories, and everyone is invited to write a story or poem constructed of six sentences based on a cue word given. This week’s cue word is Rodeo

Press Gang for a Bull

The rodeo clown chased me through town, his oversize clothes flapping in the wind, his shrieking laughter echoing about the deserted streets.

What a fool I was to get so drunk while on shore leave, to abandon my crew mates and walk alone in a strange town in search of adventure; yet, Lord, how could I have imagined to be so cursed as to cross that rodeo clown.

Finally he cornered me in a dark alley, and I bunched my fists to smite that crooked smile from his painted lips… but the last thing I remember was him clubbing my head with an iron bar.

Next thing I knew, I’m waking up at the rodeo, can feel syringes pulling out from my arm, and that clown telling me “Fella, all ya gotta do from now on is throw them skinny cowboys in the air and put on a show – who knows, maybe one day we’ll make ya champion.”

And as he led me out into the arena, I caught my reflection in the mirror of a Ford pickup truck, and, Lord, I was a bull – eighteen-hundred pounds of muscle and hide on four legs ready to buck, and that sonofabitch clown still telling me “Yes sir, you’re our prize Brahma now, and will go by the name of Lone Sailor.”

These days I’m treated like a star, and I put on a real good show for the folks who pay their dollars to come watch me throw cowboys in the air; though, Lord, I must confess, when I see that clown distracting me from making good a gore, I hunger for my old sailor fists to smite that crooked smile from his painted lips.

Words and drawing by Ford Waight.

My story Press gang for a Bull concerns just one of the many events featured at a typical American style professional rodeo – namely bull riding, which has been called “the most dangerous eight seconds in sports.”

In Press gang for a Bull I wanted to explore the idea of a sailor transformed into a prize rodeo bull by the will of a magical clown. I was also interested in turning on its head the idea of someone in naval service being ‘press ganged’ into an alternative service. To press gang is to take men into a military or naval force by compulsion, with or without notice, and was a practice used by European navies between the 17th and 19th centuries as a means of crewing warships. 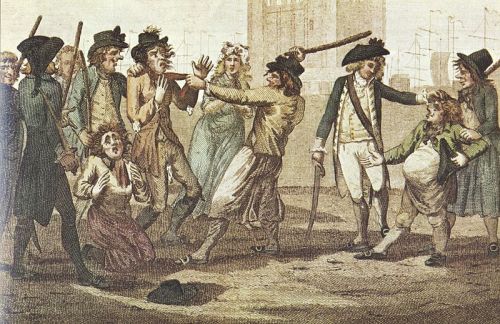 In this instance, my unfortunate sailor is press ganged into ‘becoming a bull’ and is renamed the ‘Lone Sailor’. He must now endure the rest of his days as a revered creature to the crowds, the judges, and the cowboys who try to ride him at the rodeo.

I based the clown of my story on the original rodeo clowns who back in the day were crowd entertainers who wore makeup and oversize clothing. As bull riding became more dangerous with the introduction of Brahma bulls in the early 20th century, the need for someone to act as distraction for a bull attacking a fallen rider fell to the rodeo clown. In the late 20th century, the term bullfighter began to replace the name rodeo clown, and in 2003 bullfighters in the Professional Bull Riders (PBR) organization traded their traditional rodeo clown makeup and outfits for sport gear with corporate sponsor logos.

The job of the modern day bullfighter involves bravery and strategic team working to place themselves in the path of a dangerous animal to protect the rodeo rider. The valour of famous modern day bullfighters like Frank Newsom, Shorty Gorham and Jesse Byrne was something for me to behold while I was studying video clips when making research for my story.

I made it in pencils based on a photo of the bull rider Antonio Aguilars Charros riding a Brahma bull in Mexico circa 1975, although my story is set earlier than this.

Here are two digital renders of my original, as I wanted to see some colour  and texture ‘popping’ in the scene.

Thanks for bucking with us 🙂

32 thoughts on “Six Sentence Story: Press Gang for a Bull”