An original boxed French-produced Etch A Sketch marketed as Télécran in France, the country in which it was invented.

The linographic drawing toy Etch A Sketch was invented by André Cassagnes and marketed as Télécran in France. The mechanical drawing board is instantly recognisable with its plastic red frame and two white knobs. The knobs are turned by hand to control a vertical and horizontal stylus across an aluminium powder-coated surface which creates solid lines on the screen.

Etch A Sketch has proved an immensely popular toy throughout the 1960s to present times, winning numerous awards like the ‘Toy Oscars’, induction into the ‘National Toy Hall of Fame’, the ‘Century of Toys List’, recommendations by the French Ministry of Education, and character roles in all three Toy Story movies.

You bet. I asked Wooof to test out our 1980s French version. Several hours later and three spent boxes of Catbizkit Chowbars, here are the stunning results, straight from the cat! 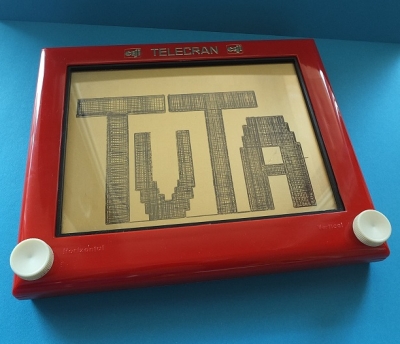 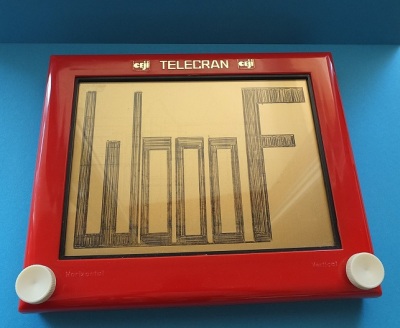 Good effort, Wooof, at a self portrait! 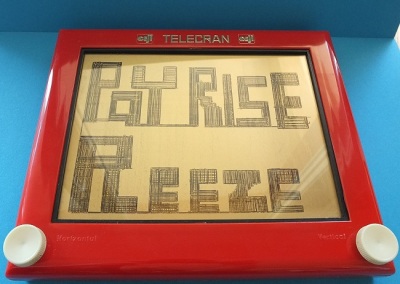 Yeah right, as if, whatever… 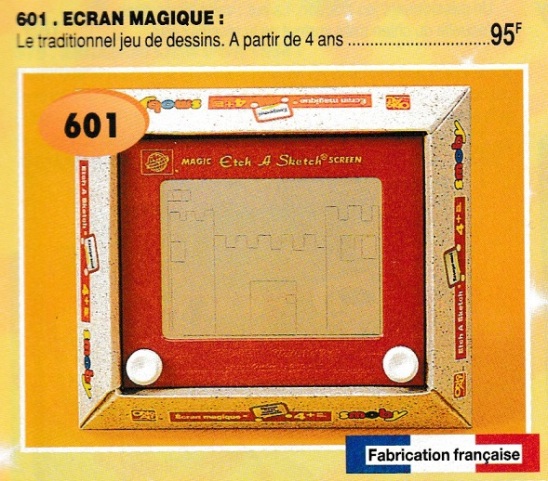 How does Etch A Sketch work? 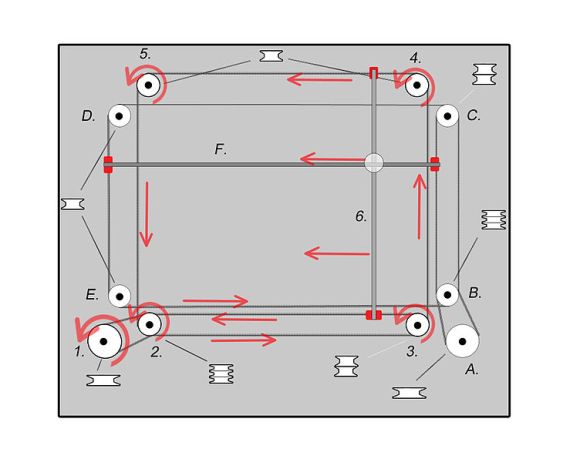 Basic mechanism of operating a 2-dimensional plotter. All of the numbered components correspond to those which move the plotter’s stylus horizontally, and the lettered components with those which move it vertically. Device consists of a series of 10 pulleys, 6 cables, 2 rails, and a stylus.
The toy is a kind of plotter. The inside surface of the glass screen is coated with aluminium powder, which is then scraped off by a movable stylus, leaving a dark line on the light gray screen. The stylus is controlled by the two large knobs, one of which moves it vertically and the other horizontally. Turning both knobs simultaneously makes diagonal lines. To erase the picture, the user turns the toy upside down and shakes it. Doing this causes polystyrene beads to smooth out and re-coat the inside surface of the screen with aluminum powder. The “black” line merely exposes the darkness inside the toy. Filling in large “black” areas allows enough light through to expose parts of the interior. – Author: K.D. Schroeder – graphic name.svg from Wikimedia Commons – License: CC-BY-SA 3.0

That’s all for now Etcher-sketchers, thanks for getting doodly with us 🙂

11 thoughts on “Etch A Sketch”