Welcome to part 6 of TVTA’s series Never Mind The Adverts… Here Are The Toys.

In this edition we focus on the best (or 2nd best, depending on your stance) musical band to come out of the Star Wars original trilogy films:

Sy Snootles and the Rebo Band 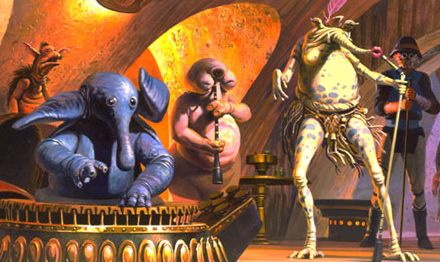 US toy manufacturer Kenner released the Sy Snootles and the Rebo Band Action Figures in 1983 for their 3.75 inch action figure line. The characters are representative of the alien pop band hired by gangster Jabba the Hutt in the third instalment of the original Star Wars trilogy film Return of the Jedi. The set was also released for the European Trilogo line, and the Spanish Lili Ledy line.

Singing from curling lips that sprout from the end of her long proboscis, with spindly legs and arms, could Sy Snootles be the galactic female equivalent of Mick Jagger?

There are barely a handful of female O/T Star Wars figures; luckily Sy Snootles attempts to make up for this by being one of the grooviest and most interesting-looking alien of the entire line!

Her action figure does her fine justice.

Max Rebo is the floppy-eared blue elephant-like keyboard player and leader of the Max Rebo Band. He comes from planet Orto, and his species is Ortolan. His piano is called a Red Ball Organ.

Droopy McCool is a flute-playing Kitonak from planet Kirdo III.

This is the second Sy Snootles and the Rebo band I’ve owned. My first was a boxed Trilogo which I traded a while back for other Stars Wars stuff. Here are a couple of pics I saved.

I really love this set and wish that Kenner had also made some Biths for a cantina band play set. That would be some jam session putting both bands together!

As always, thanks for looking. Join us again soon for another Never Mind The Adverts!