Welcome to another scintillating edition of Non-toy ad Tuesday – the brassy and brazen blog post with big shoulders barging toy adverts out of the way to bring you a bonanza of (b)randomness as advertised back in the 1970s and 1980s!

Woah Wooof, what did you just say… you’re betting me 6 pounds, a dozen copies of vintage Misty and the instructions to a Habitrail Hamster Wonderland that I can’t get through this blog post without mentioning Simon Le Bon?!? Ha, what a crazy cat of an office cat you are! This will be easy. Prepare to lose, Wooof, because I’m bringing it on right now with some fantastic video value from R.T.V……

… and a great way to part with your hard-earned cash – see how expensive video tapes were back in the day? Joining a video club was often a good way to get a discount when making miltiple purchases.

While we’re on the subject of video tapes, how about some blank tapes to record those episodes of the A-Team or Knight Rider you keep missing because you have to go to boy/girl Scouts? Be sure to label your cassettes though, otherwise mum might tape over them with episodes of Dallas or Dynasty!!

I love this colourful ad from Curly. Top prize here was a trip to China. Others prizes included soft toy panda bears. You can still get Curly Cacahuéte (peanut) chips here in France, a popular choice to go with aperatif.

It’s all potatoes in the end…

Staying on the subject of chips… here is an advert for some UK chips, except that in the UK chips are known as crisps unlike in France where they’re called chips, whereas, in the UK, chips are actually sliced then deep-fried or oven baked potatoes…. when In France chips (peeled, fried etc) are called frites (skinny chips) but are actually Belgium in origin yet in the UK are called French fries… Ha! Confused? Don’t be. Eat and be happy. Ask questions later.

This 1978 ad is part of a football-themed series created for Smiths Football Crazy crisps brand. You can see further examples of these in some of my other Non-toy ad Tuesday posts. 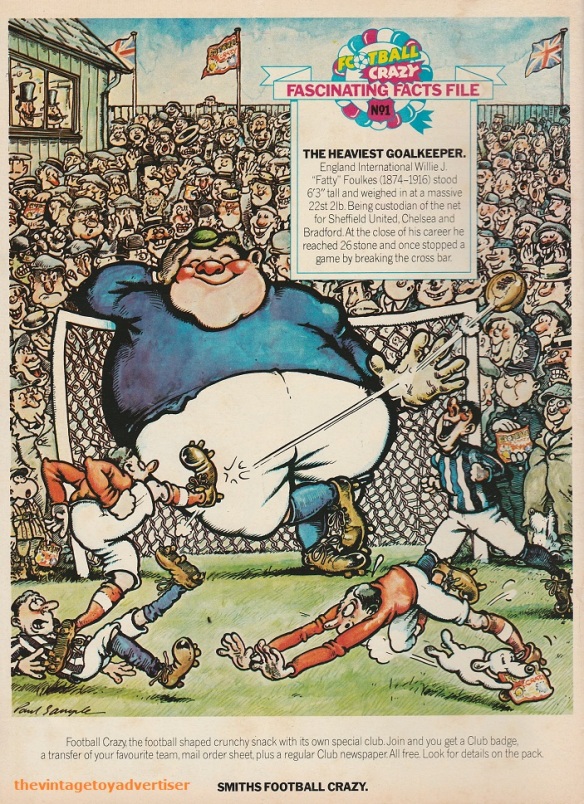 Griffin Young Savers Bank Account… get the kids in the system as soon as you can!

No, not this Griffin…

In the eighties UK banks like the Midland enticed young savers with gifts of stationery, bags, folders and maths sets… all gloriously emblazened with the bank’s corporate logo and kid-friendly cartoon mascot. 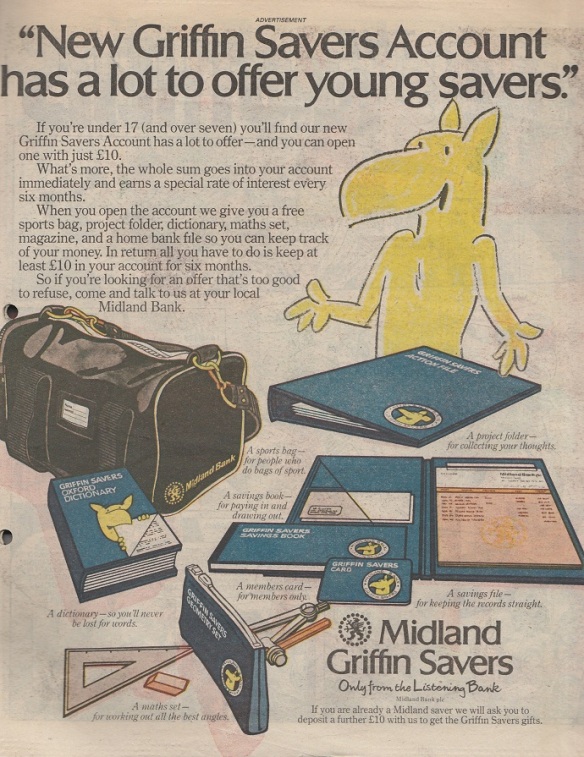 Let’s not allow banks to have the final word in this Non-toy ad Tuesday edition… let’s give it over for some music instead. In the eighties, colour music magazines were an important fix for all your musical needs. Singles charts, latest albums, gigs, lyrics, posters, features and profiles… most magazines covered these. In the UK Smash Hits was arguably the most popular, but there was another… N°1! The following advert features The Jam, Madness, and Simon Le Bon …….

Oh. Damn. Simon Le Bon. Okay Wooof, you win, you win! I’ll cough up the goods later. In the meantime let me show this final advert.

That’s all for this month. I’m off to the Midland bank to draw out 6 pounds for Wooof. Join us again soon for another fun-packed Non-toy ad Tuesday. As always, thanks for looking.