Alas, not one of my ads but something I found down the back of the internet. What a terrific way to celebrate TVTA’s 1000th published advert!

I have a special announcement… this latest batch of vintage ads brings up The Vintage Toy Advertiser’s tally of published adverts to 1000! For me, this represents a pleasing milestone in my mission to showcase vintage toy advertising and paperworks from the 1970s and 1980s. The Vintage Toy Advertiser’s humble beginnings can be traced back to 2010 when it featured French-only toy advertising. TVTA has since expanded to include not only international toy ads but other retro paperworks like posters, comics, catalogue pages, vinyl records, cartoons, Non-toy ad Tuesday, and even the occasional real toy

I’d like to give a big shoutout to my followers and say thank you kindly for your valued reading, commenting and likes. Thanks also to the many visitors that come this way via search engines, links and social media. I hope you all continue to enjoy the ads, the fun, the laid-back vibes, the random woooftastic adventures of our office cat, the fabled TVTA Secret Hidden Level (which even I can’t find, grrr!), and anything else you might stumble across in this electronic tome of toys in time (I might use that again)  – oh, and here’s to the next 1000 ads!

Public service adverts – has health and safety ever been this cool?

To kick off this special post, here are some vintage public service ads aimed squarely at keeping us, the public, on the right side of the safety barrier. Some feature well-known superheroes – a good advertising tactic when trying to sell something or get a message across. Let’s start with the man of steel…

“Stamp it out with Superman”

England, the 1980s, an anti-smoking campaign, and I can remember our school sending off for the Superman packs (some of the older kids were sorely disappointed to discover these weren’t actually packs of Superman cigarettes but packs of information – damn). Soon our school was plastered everywhere with posters of Superman battling a strange new adversary – Nick O’Teen!! But back In those days it seemed everyone smoked… your mum, your dad, your elder sister, the local shopkeeper, TV presenters, Doctors… so it seemed a bit unfair that poor old Nick O’Teen was always on the wrong side of Superman when he was only doing what most people were doing back then – smoking – and he was an adult too (or a very ugly kid). Looking at Nick O’Teen now, I really appreciate his costume design: the cigarette-hat with wafting smoke; the distressed, yellow and brown clothing; the dark cape; the amber teeth – though I do wonder why they gave him gardening gloves? Anyway, can’t tell you how pleased I was to come across this ad recently and add it to the collection at last.

In the mid 80s, Marvel Comics teamed up with the National Committee for Prevention of Child Abuse to bring us superhero characters Power Pack and Spider-man with their messages for kids on how to prevent sexual abuse. Power Pack is a fictional team of superheroes consisting of four young siblings. They were created by writer Louise Simonson and artist June Brigman and first appeared in their own series in 1984. Alongside Spider-man, these heroes packed a mighy punch with their message.

Issued by the Department of Transport, the Scottish Development Department and the Welsh Office, the Green Cross Code was a public service campaign aimed at British schoolchildren for the prevention of road traffic accidents. Actor Dave Prowse, who many of you will be familiar with for his role as Darth Vader in Star Wars, was employed to play the part of the Green Cross Man in a series of television adverts. The campaign also relied on magazine and comic adverts to get across its message. Here are two of them.

This way to the hospital!

A 1984 safety message for cyclists… this is an odd one because it’s not sponsored by any government safety agency, or committee against this and that, or society for the prevention of, or anything really. I can’t help wonder if this advert was actually paid for by some disgruntled motorist fed up to the back teeth of cyclists ruining his or her daily commute on the road. In fact, the more I look at it the more I’m convinced that the message “this way to the hospital” is more a threat than a warning!!! 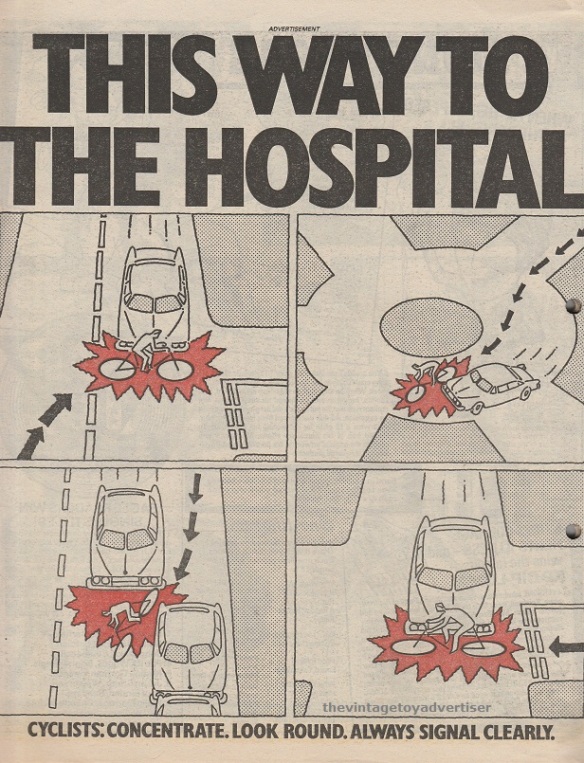 Remember when the war was against drugs and not terrorists? This 2001 Office of National Drug Policy / Partnership for a drug-free America advert offers a choice of replies to give when confronted with the offer of drugs by a friend.

Lastly, and staying In the year 2001, the Lorillard Tobacco Company’s Youth Smoking Prevention Programme put their name to the following ad which I can only assume was created to terrify teens into not smoking their products by showing psychedelic comic horror graphics of a grinning cigarette launching itself from the mouth of a petrified teen. Or was it to show just how cool cigarettes are? When I first saw this ad I thought it was an anti-marijuana campaign… no, it’s anti-cigarette – made by a cigarette company which is now defunct. Whacko indeed.

Stay clear of Satanic toys, don’t smoke, don’t do drugs, mind the road, and don’t believe everything you read, just some of it… the parts you do are entirely up to you.

Thanks for looking, keep safe.