There are many vintage comics and magazines featuring the Star Wars trilogy that appeal to collectors. Issue 27 of the July 1982 comic Tintin is one of them. This Empire Strikes Back-specific issue was packed full of Star Wars features, including its cover, two prize competitions, an article on the toys, a profile on George Lucas and his films, an advert, and a full-colour centrefold poster with art by Ralph McQuarrie.

Tintin was published weekly for a Franco-Belgian audience in both Dutch and French language. The copy of issue 27 that I recently picked up was originally sold in Belgium and printed in French. It had been on my collecting radar for a long time and I couldn’t wait to open it up. When I did, I was surprised to find an additional little Star Wars nugget tucked loose inside the pages… an erratum from the Editor-in-Chief, presented as an A4 sheet of paper which had been included to inform readers of a not-so-minor printing error. 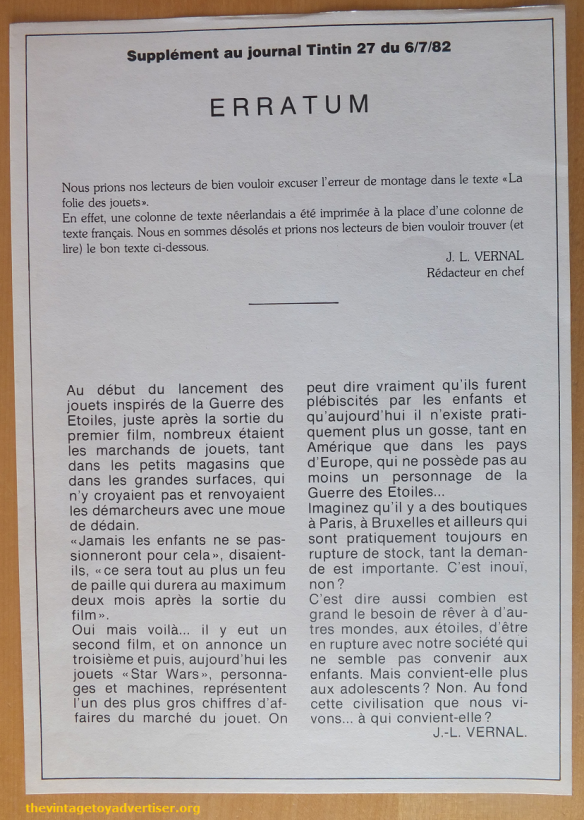 The erratum was included loose in the pages of the comic and showed the missing French text from the article on page 15.

Here is the offending article from page 15. Look at the left-hand column – mistakenly printed in Dutch. The right-hand column is in French like the rest of the text in the comic.

For Bi-lingual readers only? Please refer to your erratum if in difficulty.

I’ll admit I was geekily pleased by the addition of this erratum as it added an extra collectable interest to this comic which I’d had my eye on for a long while.

Another oddity I found was the Ralph McQuarrie artwork poster – it’s an inverted print from his original, and his signature reads backwards – EIRRAUQCMR 🙂

Here are the remaining Star Wars features found in the comic – Page 3. Movie talk. The article mentions the upcoming third part of the trilogy: ‘La Revanche Du Jedi’ which is the French translation for the short-lived title ‘Revenge of the Jedi’ before it was changed to ‘Return of the Jedi’. 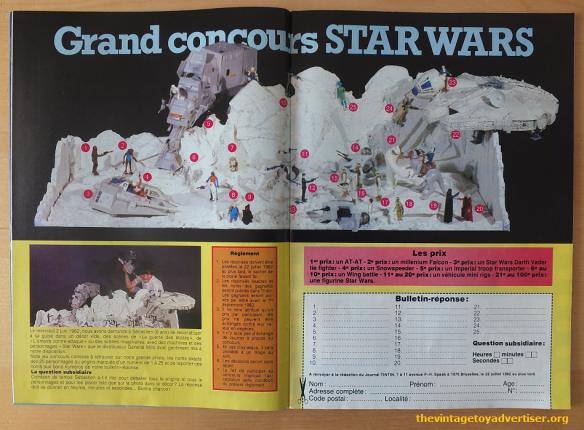 Pages 16 and 17. Prize competition to win Star Wars toys. First prize was an AT-AT, second a Millenium Falcon, and third was a Darth Vader TIE Fighter. There were many additional prizes such as mini rigs and action figures.

And finally, flicking all the way back to page 7 (and the author would have been miffed not to have found at least one Star Wars advert… luckily this comic doesn’t disappoint) – it’s an advert for the ESB Display Arena. 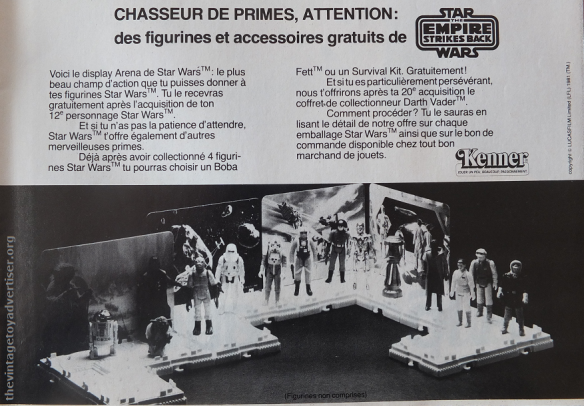 Photographs of the original text and images from the comic have been reproduced here by the author for research and educational purposes. Original copyright is Tintin N°27, 1982, Belgium.