Luke: “You mean this is not a light saber after all, but a giant chopstick?” Ackbar: “Ahar, that be true alright, now quit ye whining and have at that sushi!” Advert from Pif Gadget 737. 1983. France.

Yes, another Star Wars post based on the 4th / force pun shooting its way across the webniverse to celebrate all things Star Wars!

So, Happy Star Wars day, May the fourth be with you, Jar-Jar-Rasputin, SW4eva, Go 4th and multiply, etc etc! And… did you know that George Lucas hates sushi?

“Waiter, there’s a bear in my sushi”

George Lucas hates sushi. During the development stages for Return of the Jedi, George was taken to a sushi bar by Harrison Ford, who you may be surprised to learn is an avid connoiseur of sushi and author of the bestselling books The sushi run in less than 12 parsecs, and I love sushi… I know, and is co-owner of several sushi bars around the galaxy!

Seated at the sushi bar table, George soon became bored to tears with Harrison’s endless tales of sushi presentation styles and more raw-fishy tales than you could shake a lightsaber at. “Never tell me the odds!” boasted Ford, “Hokey religions and ancient weapons are no match for a good sushi!” Losing the will to live, George began aimlessly toying with his food. It was then that George noted the sushi on his plate was beginning to resemble primitive, hunter-gatherer, bear-like creatures. And so the idea for the Ewoks was born! Lucas, overjoyed at the culinary plot discovery on his plate – thanks to Ford’s insistance on a sushi lunch date that day – decided to reward Ford by handing him the coveted role of playing the hero spit-roasted by the Ewoks in Return Of The Jedi. 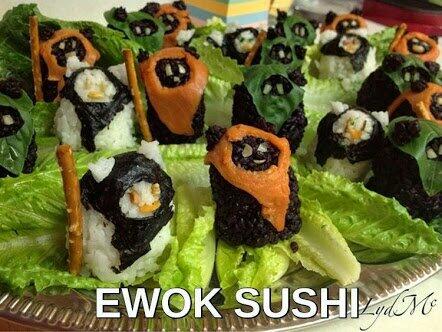